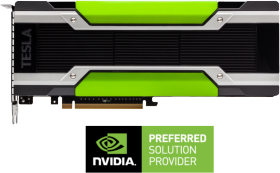 The NVIDIA Tesla P100 accelerators are the world’s most advanced data center GPUs ever built, designed to boost throughput and save money for HPC and hyperscale data centers. Powered by the brand new NVIDIA Pascal™ architecture, Tesla P100 for PCIe-based servers enables a single node to replace up to half-rack of commodity CPU nodes by delivering lightning-fast performance in a broad range of HPC applications. Handling the same workload with far fewer nodes means customers can save up to 70% in overall data center costs.

With 400 applications accelerated, including 9 out of top 10 HPC applications, every HPC customer can now deploy accelerators in their data center to keep up with ever-growing user demands while saving money.

The best server buying experience you will find

Our shopping experience and customer service are unmatched in the industry, providing our customers with the best system configurator online, while our expert solution architects are never more than a click or call away to help you ensure you are purchasing the right product for your needs. You can count on us after your purchase, as well. All Thinkmate systems can be combined with a 3-Year warranty with advanced parts replacement, along with the opportunity to upgrade to a 5-year advanced replacement or next business day on-site warranty, ensuring business continuity.

GridList
Displaying 10 of 10 systems
1U