Data is the most valuable asset of any business today. Lost data means lost business! Even if you backup regularly, you need a fail-safe way to ensure that your data is protected and can be accessed without interruption in the event of an online disk failure. Adding RAID to your storage configurations is one of the most cost-effective ways to maintain both data protection and access.

While a number of companies offer RAID, not all RAID implementations are created equal. With over 24 years of SCSI development experience, only Thinkmate offers the most robust RAID data protection available today, based on a hardened RAID code proven over years of use in demanding environments and resold by most of the top-tier computer manufacturers.

To choose the RAID level that's right for you, begin by considering the factors below. Each one of these factors becomes a trade-off for another:

Adding RAID to your storage configurations is one of the most cost-effective ways to maintain both data protection and access.

Offers low cost and maximum performance, but offers no fault tolerance; a single disk failure results in TOTAL data loss. Businesses use RAID 0 mainly for tasks requiring fast access to a large capacity of temporary disk storage (such as video/audio post-production, multimedia imaging, CAD, data logging, etc.) where in case of a disk failure, the data can be easily reloaded without impacting the business. There are also no cost disadvantages as all storage is usable. RAID 0 usable capacity is 100% as all available drives are used.

Provides cost-effective, high fault tolerance for configurations with two disk drives. RAID 1 refers to maintaining duplicate sets of all data on separate disk drives. It also provides the highest data availability since two complete copies of all information are maintained. There must be two disks in the configuration and there is a cost disadvantage as the usable capacity is half the number of available disks. RAID 1 offers data protection insurance for any environments where absolute data redundancy, availability and performance are key, and cost per usable gigabyte of capacity is a secondary consideration.

RAID 1 usable capacity is 50% of the available drives in the RAID set.

Combines data striping from RAID 0 with data mirroring from RAID 1. Data written in a stripe on one disk is mirrored to a stripe on the next drive in the array. The main advantage over RAID 1 is that RAID 1E arrays can be implemented using an odd number of disks.

RAID 5 uses data striping in a technique designed to provide fault-tolerant data storage, but doesn't require duplication of data like RAID 1 and RAID 1E. Data is striped across all of the drives in the array, but for each stripe through the array (one stripe unit from each disk) one stripe unit is reserved to hold parity data calculated from the other stripe units in the same stripe. Read performance is therefore very good, but there is a penalty for writes, since the parity data has to be recalculated and written along with the new data. To avoid a bottleneck, the parity data for consecutive stripes is interleaved with the data across all disks in the array.

RAID 5 requires a minimum of three disks to be implemented. RAID 5 usable capacity is between 67% - 94%, depending on the number of data drives in the RAID set. 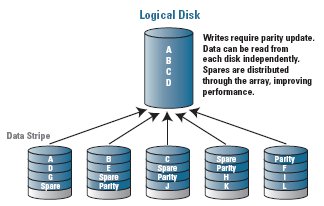 Provides the protection of RAID 5 with higher I/Os per second by utilizing one more drive, with data efficiently distributed across the spare drive for improved I/O access.

RAID 5EE distributes the hot-spare drive space over the N+1 drives comprising the RAID-5 array plus standard hot-spare drive. This means that in normal operating mode the hot spare is an active participant in the array rather than spinning unused. In a normal RAID 5 array adding a hot-spare drive to RAID 5 array protects data by reducing the time spent in the critical rebuild state. This technique does not make maximum use of the hot-spare drive because it sits idle until a failure occurs. Often many years can elapse before the hot-spare drive is ever used. For small RAID 5 arrays in particular, having an extra disk to read from (four disks instead of three, as an example) can provide significantly better read performance.

For example, going from a 4-drive RAID 5 array with a hot spare to a 5-drive RAID 5EE array will increase performance by roughly 25%.

RAID 5EE useable capacity is between 50% - 88%, depending on the number of data drives in the RAID set. RAID 5EE requires a minimum of four disks to be implemented. 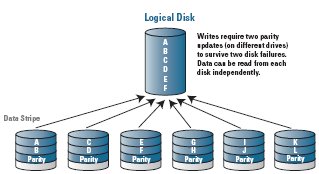 Data is striped across several physical drives and dual parity is used to store and recover data. It tolerates the failure of two drives in an array, providing better fault tolerance than RAID 5. It also enables the use of more cost-effective ATA and SATA disks to storage business critical data.

This RAID level is similar to RAID 5, but includes a second parity scheme that is distributed across different drives and therefore offers extremely high fault tolerance and drive failure tolerance. RAID 6 can withstand a double disk failure.

RAID 6 requires a minimum of four disks to be implemented. Usable capacity is always 2 less than the number of available disk drives in the RAID set.

Note: With less expensive, but less reliable SATA disk drives in a configuration that employs RAID 6, it is possible to achieve a higher level of availability than a Fibre Channel Array using RAID 5. This is because the second parity drive in the RAID 6 RAID set can withstand a second failure during a rebuild. In a RAID 5 set, the degraded state and/or the rebuilding time onto a hot spare is considered the window at which the RAID array is most vulnerable to data loss. During this time, if a second disk failure occurs, data is unrecoverable. With RAID 6 there are no windows of vulnerability as the second parity drive protects against this.

Combines RAID 0 striping and RAID 1 mirroring. This level provides the improved performance of striping while still providing the redundancy of mirroring.

RAID 10 is the result of forming a RAID 0 array from two or more RAID 1 arrays. This RAID level provides fault tolerance - up to one disk of each sub-array may fail without causing loss of data.

Usable capacity of RAID 10 is 50% of available disk drives.

Combines multiple RAID 5 sets with RAID 0 (striping). Striping helps to increase capacity and performance without adding disks to each RAID 5 array (which will decrease data availability and could impact performance when running in a degraded mode).

RAID 50 comprises RAID 0 striping across lower-level RAID 5 arrays. The benefits of RAID 5 are gained while the spanned RAID 0 allows the incorporation of many more disks into a single logical drive. Up to one drive in each sub-array may fail without loss of data. Also, rebuild times are substantially less then a single large RAID 5 array.

Usable capacity of RAID 50 is between 67% - 94%, depending on the number of data drives in the RAID set.

Combines multiple RAID 6 sets with RAID 0 (striping). Dual parity allows the failure of two disks in each RAID 6 array. Striping helps to increase capacity and performance without adding disks to each RAID 6 array (which would decrease data availability and could impact performance in degraded mode).